No matter the project — from a simple structure to a massive, multi-million-dollar bridge system — efficient construction requires thorough planning. But, even with flawless logistics, projects can run into challenges that put deadlines in jeopardy.

Construction is currently underway in the Philippines on a massive bridge system connecting Cebu City with Cordova on the southern end of Mactan Island. The 8.5-kilometer (5.3-mile) Cebu-Cordova Link Expressway, slated for completion in 2021, will span the Mactan Channel with 51-meter (167-feet) navigational clearance for shipping vessels. It promises to ease congestion between Cebu and Mactan and boost economic activities throughout the region by providing additional access to the island and the Mactan-Cebu International Airport for an estimated 50,000 vehicles a day.

As expected, the construction  — one of the largest infrastructure projects in the country — relies on a carefully choreographed plan of simultaneous operations to meet strict deadlines. Expert logistics allow crews to avoid many hurdles; however, unforeseen challenges can still arise. When a bad batch of concrete threatened to derail progress on one of the bridge’s first pilons, project managers needed a creative solution that could quickly remove the poor-quality concrete without damaging the rebar or putting the project behind schedule. Hydrodemolition was the only process with the precision and productivity to keep the project on track.

Cebu Link Joint Venture (CLJV) contacted Singapore-based Asia Waterjet Equipment, the region’s premier Hydrodemolition experts. Access and site conditions presented quite a challenge, but with decades of experience in some of the most hazardous applications, Asia Waterjet Equipment was more than up to the task. With the clock ticking and monsoon season in full swing, the team arrived onsite with an Aquajet Aqua Cutter 710V Hydrodemolition robot and Jetstream HP Waterjetting Pump. 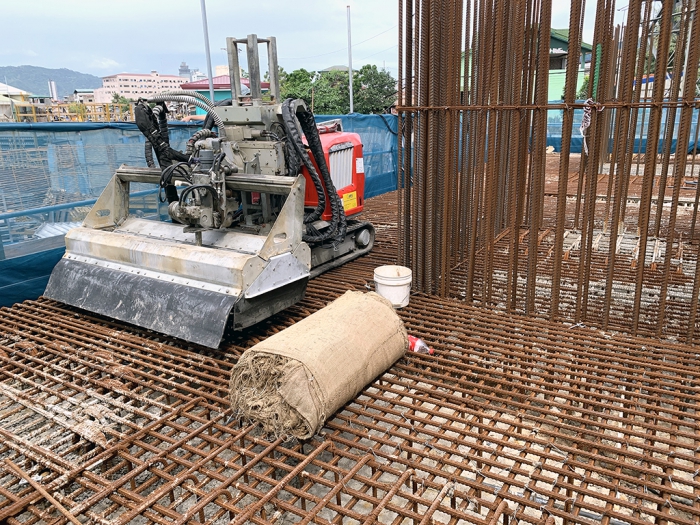 When a bad batch of concrete threatened to derail progress on a major bridge project in the Philippines, Asia Waterjet Equipment turned to Aquajet for a creative solution that could quickly remove the poor-quality concrete without damaging the rebar or putting the project behind schedule

In the early 1990s, Asia Waterjet Equipment’s founders were part of the brave crews tasked with containing oil wells in Kuwait that were destroyed during the Persian Gulf War. Their experience helped avert a huge environmental crisis. They remained in the Middle East, eventually founding Asia Waterjet Equipment in 2006, bringing high-pressure water jetting and robotic Hydrodemolition to the Middle East and South East Asia.

Now, with offices in Dubai, Abu Dhabi, Saudi Arabia, Bahrain and Singapore and a strong presence and partnerships throughout these territories, the company is known for creative problem solving — delivering innovative cutting and cleaning solutions for hazardous areas or difficult to pump products in petrochemical, wastewater, mining, construction and other industries. They also offer a range of robotic solutions to help customers protect employees and perform beyond expectations.

“Our focus has always been providing the cutting-edge tools to make challenging applications safer and more efficient,” said Chris Parkhill, Asia Waterjet Equipment Sales Director for Southeast Asia. “From the very beginning, we’ve been involved in some of the most hazardous operations out there. We understand the demands and dangers, which is why we partner with industry-leading equipment manufacturers for robust solutions that maximize safety and productivity.”

Pairing the right tools with experienced team members who bring a wealth of industry knowledge and a deep understanding of local markets to each project has earned Asia Waterjet Equipment a reputation for high-quality results. In emerging markets, such as the Philippines, where the demands of multi-million-dollar projects have become a proving ground for newer, more efficient technologies, this expertise puts the company at the forefront.

“From North Africa to South East Asia, we cover a lot of ground,” Parkhill said. “But being able to meet the contractor where they are is key to a successful solution. Working with CLJV, there were a number of challenges we had to overcome to keep the project on track. Hydrodemolition was the best solution and Aquajet was the best tool for the job.” 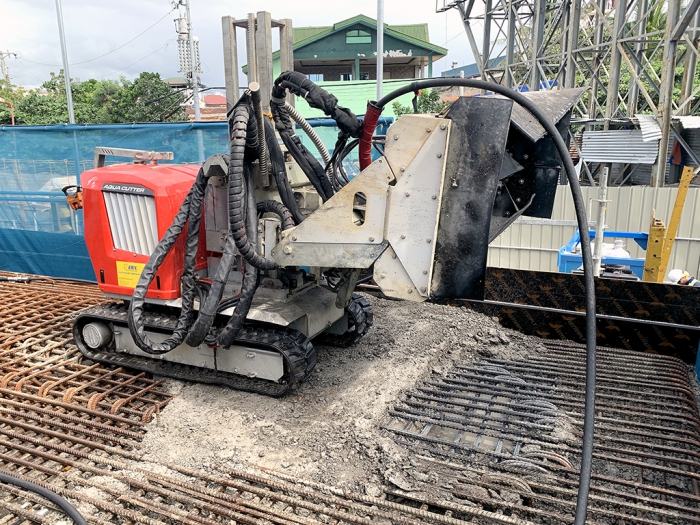 To protect rebar and the existing good concrete, Asia Waterjet Equipment knew Hydrodemolition was the only solution. The non-intrusive method uses high-pressure water jets as powerful as 40,000 psi manipulated by an automated robot to remove layers of deteriorated and damaged concrete. 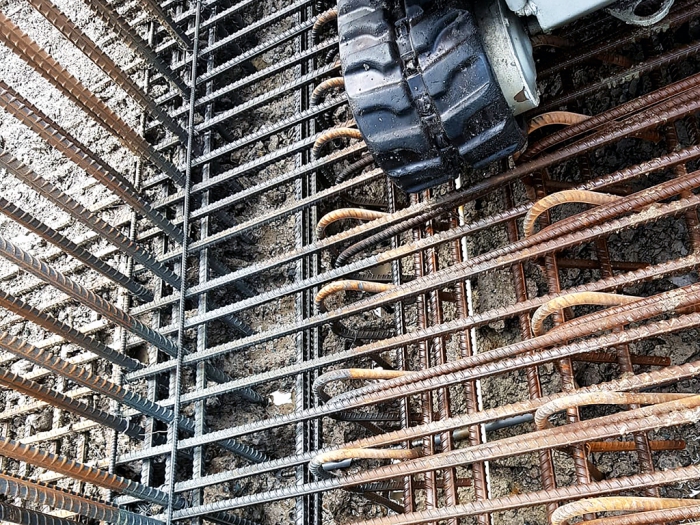 Crews with handheld breakers or excavators could remove the poor-quality concrete, but only by destroying the rebar. Asia Waterjet Equipment knew Hydrodemolition was the only process with the precision and productivity to keep the project on track.

Access was the primary problem. CLJV was conducting construction on several bridge pilons simultaneously. To minimize disruptions to the local community, the project’s primary staging area, as well as the initial pilon, were only accessible from the coast. This meant the concrete had to be mixed 2.5 kilometers (1.6 miles) down the coast then transported by barge to the jobsite. From there, the barge was grounded, and the trucks disembarked directly onto the beach. The pilon was 30 meters (98 feet) inland.

Overall, the transportation delay had no negative impacts on the concrete, and the 16-by-14-meter (52.5-by-45.9-foot)  pilon quickly grew to 4 meters (13 feet) tall. However, a complication with a single delivery threatened to throw the entire project behind schedule and over budget.

“When you are working with concrete, sometimes things don’t go to plan,” Parkhill said. “It’s a delicate equation, after all, and even a slight miscalculation can ruin the mixture. Unfortunately, when that happens, there isn’t an easy fix.”

Crews knew there was a problem immediately. The concrete was already setting as they pumped.  Vibrating and other correctional methods failed, and the pour was ultimately unsuccessful. Even worse, the concrete fell 350 millimeters (13.8 inches) short, leaving a mesh of exposed rebar.

For CLJV and Asia Waterjet Equipment, the challenges were adding up, making for a very difficult repair. The pilon was nearly complete. While CLJV had budgeted time and money for small complications, it could not afford to demolish the whole pilon and start over.

Crews with handheld breakers or excavators could remove the poor-quality concrete, but only by destroying the rebar. They would have to cut the exposed rebar at the top of the pilon to access the concrete a foot below. More rebar would be damaged as the poor-quality concrete was removed, and microfractures from the vibration of jackhammers or excavators would weaken the remaining concrete, jeopardizing the pilon’s integrity.

“There was no option; the rebar and existing good concrete had to be protected,” Parkhill said. “If CLJV went with traditional demolition methods, they’d have to open, pry apart where possible or cut the rebar and manually jack hammer out the bad concrete. There’s no guarantee a man using a jack hammer could gauge what’s good and what’s bad, so they’d end up removing extra. Then they’d have to bend the rebar back into place without breaking it, or weld or cut new threads and join with it threaded couplers. It would add weeks to the project and a significant cost to the budget. They simply couldn’t afford it.”

Asia Waterjet Equipment knew Hydrodemolition was the only solution. The non-intrusive method uses high-pressure water jets as powerful as 40,000 psi manipulated by an automated robot to remove layers of deteriorated and damaged concrete. The high-pressure water exceeds the strength of the concrete to widen existing pores and microcracks, breaking it apart in a controlled manner. Unlike other mechanical methods, Hydrodemolition is impact free, eliminating the vibrations that cause microfractures. 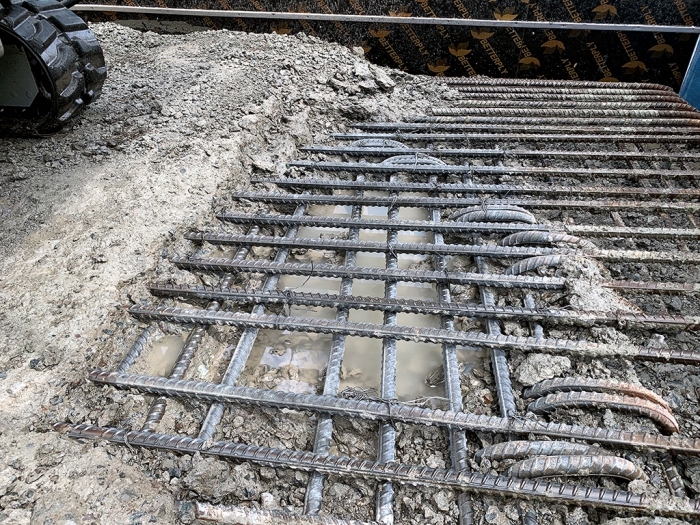 With the ability to complete concrete removal tasks up to 25 times faster than a hand lance, the Aquajet’s Aqua Cutter provided the necessary solution to keep the Asia Waterjet Equipment’s project on schedule.

Productivity was also a concern. With simultaneous construction continuing on several other pilons in the area, crews needed to remove the poor-quality concrete and complete repairs quickly — with minimal labor.

With the ability to complete concrete removal tasks up to 25 times faster than a hand lance, the Aqua Cutter provided the necessary solution to keep the project on schedule. Asia Waterjet Equipment brought in Aquajet Special Application Manager Kjell Isaksson to support the operation.

“There were a lot of variables and no room for error,” Parkhill said. “To minimize the risk of delays, we decided it would be best to have an Aquajet specialist on site.”

Like the cement trucks, the Aqua Cutter and all support equipment, including a high-pressure waterjet power pack with a 4200 series Jetstream pump, had to access the site from the Mactan Chanel. Proximity to the water and the frequent, heavy rains of monsoon season made ground conditions difficult. However, since the Aqua Cutter is self-propelled with tracks, the uneven, muddy terrain presented no problems for Asia Waterjet Equipment. This minimized necessary site preparations and helped accelerate repairs. 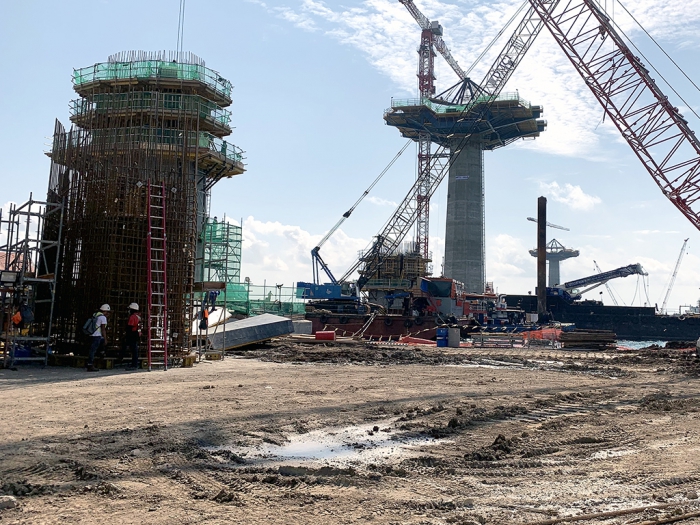 The uneven, muddy terrain at the jobsite presented no problems for the self-propelled Aqua Cutter. This minimized necessary site preparations and helped accelerate repairs.

Crossing the Bridge to Success

This mobility was also necessary for tackling the demolition itself. Once lifted the 4 meters (13 feet) onto the pile cap by a crane, the Aqua Cutter was able to easily maneuver over the rebar. The high-pressure pump was setup 7 meters (23 feet) away and connected to the Hydrodemolition robot by a high-pressure hose.

To help reduce cost and increase production, Asia Waterjet Equipment opted to use seawater for the majority of the demolition rather than bring in fresh water. The company continually filled two 20-cubic meter (5,283 gallon) night tanks directly from the Mactan Chanel. Fresh water was only used during the last two days of the project to remove salt and other impurities that could impact bonding.

“With the Aquajet Aqua Cutter, we increased productivity to a point where construction was back on schedule,” Parkhill said. “Without Hydrodemolition, there’s no way CLJV would have been able to do that.” 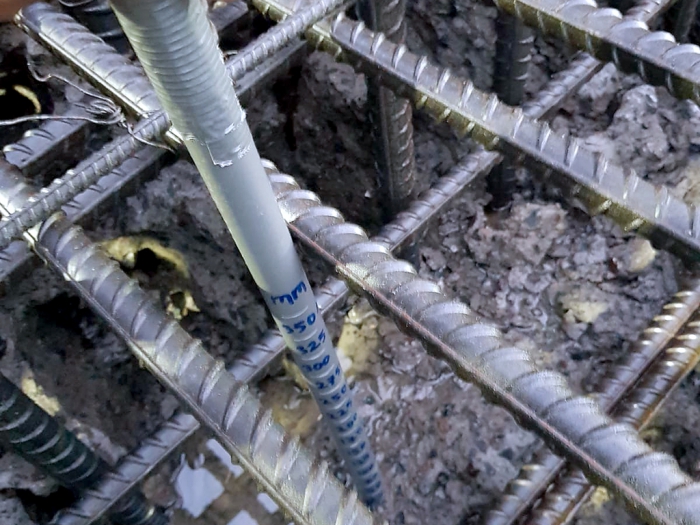 The Future of Hydrodemolition

While construction on the bridge system continues, Asia Waterjet Equipment is already on to the next challenge.

“Construction in Southeast Asia is changing,” Parkhill said. “Robotic processes like Hydrodemolition are proving you can have productivity and safety. With innovative partners like Aquajet, Asia Waterjet Equipment is playing a leading role in facilitating that change.”

Location:
A massive bridge system connecting Cebu City with Cordova on the southern end of Mactan Island in the Philippines.

Hydrodemolition project:
Selective concrete removal of poor-quality concrete without damaging the rebar or putting the project behind schedule.