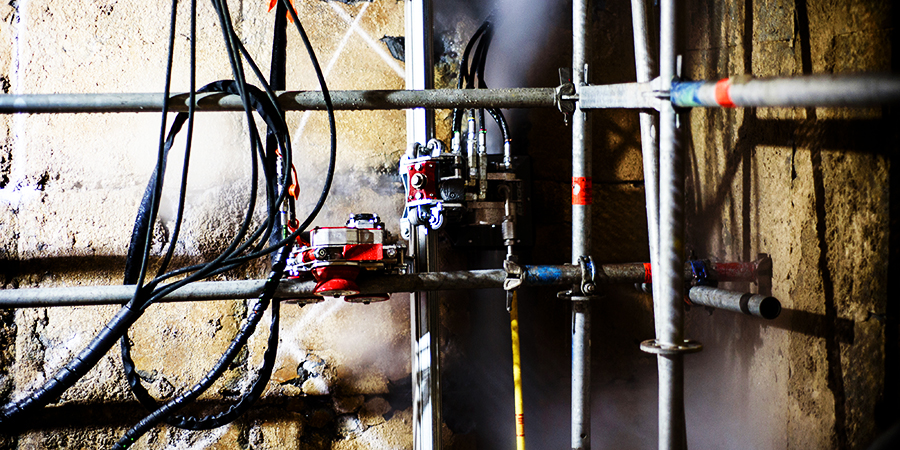 
Aquajet Systems AB, a global leader in Hydrodemolition robot manufacturing, offers the Ergo System as a revolutionary alternative in industrial cleaning applications. The Ergo Controller offers four times the power of a hand lance in a compact unit. It provides the maneuverability and power to keep workers out of harm’s way during hazardous cleaning applications in oil, gas, petrochemical, refractory, nuclear and other industries. Using a number of productivity-enhancing attachments, contractors can remotely operate the Ergo System for efficient cleaning and removal of material in boilers, tanks, pipes and other industrial containers and conduits. 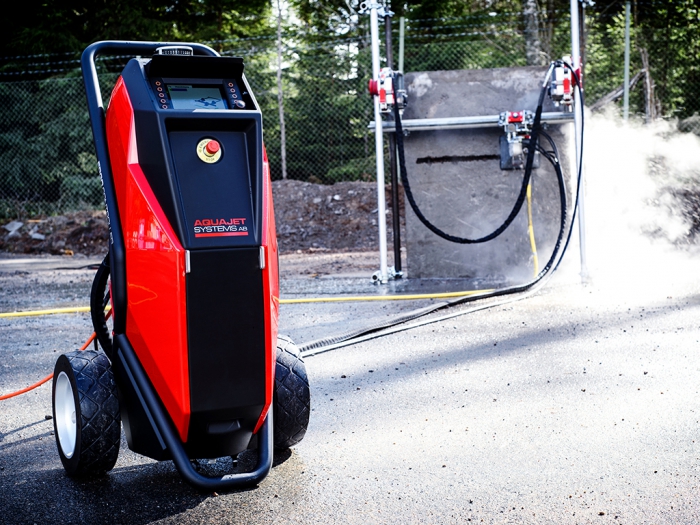 “Automated tools are not new technology in industrial cleaning applications, but the Ergo System goes a step further — providing more precise control while giving operators the ability to step back from dangerous situations,” said Roger Simonsson, Aquajet Systems managing director. “What sets Aquajet apart is the durability and versatility of our machines. We started with heavy-duty machines designed for concrete removal. But as the technology advances, so does our engineering. With the Ergo System, we can provide a smarter, more robust option for industrial cleaning that gives operators more control, precision and flexibility to get the job done.”

The Ergo System incorporates the controller unit, which powers and controls the hydraulics; the Ergo Power Head, which manipulates the high pressure lance; and either the spine or the climber, which are unique systems used to support and maneuver the power head, based on project needs. The climber attaches to any standard scaffolding or pipes and robotically moves along it to deliver powerful hydrodemolition forces for removal of materials such as paint, rubber coatings, petroleum products, rust and decayed concrete in a number of vertical vessels.

The Ergo System also works with any of three attachments in the Ergo Rotolance series for improved capabilities in confined or hard to reach places. The Ergo Rotolance 30, 130 and 130s work at pressure ranging from 1,450 to 43,500 psi (100 to 3,000 bar) and offer a variety of nozzle configurations for a spray pattern diameter from 1.2 inches to 5.1 inches (30 millimeters to 130 millimeters).

The system exerts an impressive 1,000 newtons of reaction force, as much as four times greater than a human operator with a hand lance. This means the machine can effectively clean and remove concrete, rubber coatings, paint, rust, plastic and other materials as well as roughen surfaces for better bonding faster than traditional methods, making it ideal for resurfacing applications in tanks, reservoirs, and other containers.

Hydrodemolition robots, such as the Ergo System, remove decayed concrete and built-up materials to a preset depth consistently. Alternatively, a hand lance will likely leave inconsistent depths due to being held by an operator. This means contractors may have to do another pass to completely remove materials or risk damaging underlying surfaces by being too aggressive.

Contractors can easily move the 271-pound (123-kilogram) Ergo Controller unit around the facility or worksite and over soft or rough surfaces, due to the wide wheels and low ground pressure. At just 44 inches tall and 17 inches wide, the Ergo Controller transports easily on a pallet.

Additionally, the system is service friendly with hydraulic hose multi connectors that are 100% sealed from moisture to virtually eliminate the risk of leaks during transportation.

Aquajet Systems, which was acquired by Brokk AB in 2017, is known as the industry leader in Hydrodemolition machines and solutions, both in terms of quality and volume. The company’s headquarters and production facilities are in Holsbybrunn, Sweden. Similar to Brokk, Aquajet sells globally.