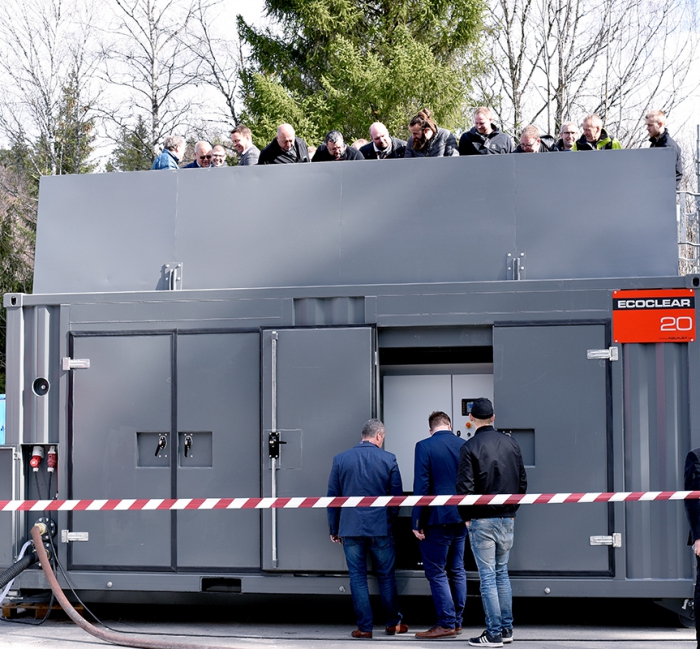 Aquajet’s innovation, EcoClear, is nominated for one of the most prestigious and coveted awards in the construction industry. The sustainable water treatment system by the Swedish hydrodemolition specialist is competing in the category “Commercial Innovation of the Year” at the annual CN Awards 2017 in the UK.

The environment is the true winner

The EcoClear water treatment system is a state-of-the-art solution dedicated to filtering hydrodemolition water, through one compact unit. It enables the operator to safely discharge water back into the environment without the need of an extra water reservoir and without the use of filters of any kind, and without pollution. The system is poweredby Siltbuster Ltd, UK’s number one solutions provider for on site water treatment, wet waste processing and the prevention of waterborne pollution. EcoClear is nominated for best “Commercial Innovation of the Year” at the Construction News Awards 2017 in the UK, for being the first solution of it’s kind, with smart and high-level programming, eliminating the need for tankering wastewater offsite.

“It may sound like a cliché, but it’s truly an honor just to be nominated. Whoever wins the award in the end, the environment is the true winner. With EcoClear, Aquajet Systems and Siltbuster, have shown the world that treatment of hydrodemolition water can be effortless, efficient and environmentally friendly. There’s no system like it in the world. We’ll keep our fingers crossed to win in July”, says Roger Simonsson, CEO of Aquajet Systems.

EcoClear is designed to work perfectly with Aquajet’s range of hydrodemolition robots, and it’s capable of handling a flow rate up 20 cubic meters per hour. With EcoClear, the operator can neutralize elevated alkaline pH levels down to pH 6-9, while having full control of the turbidity level down to 20-25 mg particles/liter. EcoClear uses flocculation technology to remove the maximum amount of sludge from the water. The whole process is easily monitored online and with the RECO control system – a truly innovative and useful tool for the operator. It allows the operator to sit back and enjoy a streamlined water treatment process. The control system also ensures that all discharged water has the correct levels. In addition, all data are logged, and can easily be exported to external storage units, such as USB flash drives. Everything is displayed in real time in an intuitive graphic interface.

In April, EcoClear and Aquajet’s robots were on display at the annual Hydrodemolition days in Holsbybrunn, Sweden. At Aquajet’s headquarters, almost 100 people from 22 countries met to test various products and learn more about hydrodemolition. As the pinnacle of Aquajet’s continuous R&D, EcoClear was the natural star during the event. The visitors also got the chance to take a closer look at Aquajet’s production facilities. During this popular event Aquajet announced many new dealer partners around the world. DDE Demolition & Drilling Equipment in South Africa, PONAR Wadowice in Poland, BROKK China, BROKK Italy, BROKK Demolition Robots in the Czech Republic, and BROKK UK are now officially partners to Aquajet Systems. The latter is one of theexhibitors at UK’s biggest working construction event, PLANTWORX, 6th-8th of June.

Furthermore, Aquajet also launched their new product catalog – filled the most versatile and advanced hydrodemolition equipment on the market. The catalog can be ordered at Aquajet’s website, aquajet.se..

About the “Commercial Innovation of the Year” award 2017

The “Commercial Innovation of the Year” category is one of 21 categories at the CN Awards 2017 in the UK. The category is open to any company that can demonstrate excellence through a new product or technology innovation which has been made available for general sale to other businesses in the calendar year 2016. The innovative new product or technology might offer benefits in health and safety, in-use asset performance, sustainability, cost or another area that can demonstrably improve the performance or quality of service that the purchasing company offers to its clients. The judges will also be looking for evidence of stand-out performance that particularly merits this award – the “wow” factor. The award ceremony is hosted by the Grosvenor House Hotel, in London, 13th of July.
Read more: awards.constructionnews.co.uk